The Energy Innovation and Carbon Dividend Act got some major media exposure recently when it was the topic of conversation on the NPR show 1A. CCL VP for Government Affairs Danny Richter was among a panel of guests talking about carbon pricing. He said the thing that sets H.R. 763 apart is the steep rate of increase for the carbon fee and the fact that revenue is returned to households.

Why has this bill gained traction? Danny said CCL worked outside the Beltway, “educating people in [nearly all] districts and teaching them about this policy… then they’ve been going back to the Beltway and building support there. So the key for us has been to go outside of the Beltway.”

Listen to Danny’s interview on 1A and share the program on social media.

The elections are over, the people have spoken, and now the Democrats control the House of Representatives. In the following statements, CCL Executive Director Mark Reynolds and CCL VP for Government Affairs Danny Richter provide some perspective on what we can expect in this new political landscape.

Mark Reynolds: “Now that Democrats control the House, there is great potential to move bipartisan legislation to price carbon. I emphasize ‘bipartisan,’ because the only way to enact an effective and enduring solution is to have buy-in from both sides of the aisle. We believe a market-based solution, putting a fee on carbon and returning revenue to households, can find the common ground between Republicans and Democrats. With the IPCC warning that we have little more than a decade to take the ‘unprecedented’ actions needed to avoid the worst outcomes of climate change, we can’t kick the can down an ever-shortening road.”

“We also want to thank Carlos Curbelo for his leadership with the bipartisan Climate Solutions Caucus, and we hope he’ll find a way to continue that leadership on climate change outside of Congress. Curbelo’s defeat, however, does not signal the end of the caucus. We’re confident other Republicans will step up to lead, and the existing and potential members are invested in continuing bipartisan work on climate. To paraphrase Mark Twain, reports of the death of the Climate Solutions Caucus are greatly exaggerated.”

Danny Richter: “With Democrats chairing committees, we’re likely to see hearings that provide a robust and constructive dialogue on climate solutions, like the carbon fee and dividend policy recently announced in Canada. We’re also wasting no time getting the ball rolling on legislation to price carbon. On Nov. 13, we’ll send 621 citizen lobbyists to Capitol Hill to generate the bipartisan momentum to move forward with a bill in the 116th Congress and make climate change a bridge issue, not a wedge issue. We’ll continue working on both sides of that bridge.” 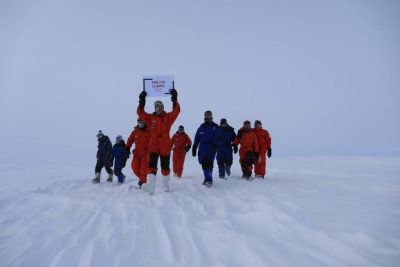 Astrobiologist Cyprien Verseux and colleagues showed support to the global mobilization from the ever shrinking ice shelves of Antarctica, marching through below zero temperatures. From “#RiseforClimate: 900+ actions on 7 continents,” 350.org, 9/9/18. 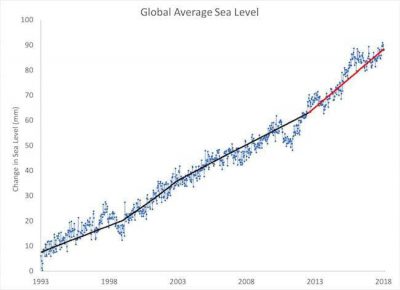 (A rise of less than 1 centimeter in 25 years may not sound like a lot, but we need to remember: 1) 1 vertical centimeter is several horizontal feet in a marsh or estuary; 2) the rise is apt to accelerate as ice becomes water around the globe.

With the term “climate change” used more often than “global warming” these days, sometimes it’s easy to overlook one of the key changes we can expect: extreme heat. This summer, devastating heat waves swept across the Northern Hemisphere. From Japan to Canada, across Europe and the United States, extreme temperatures have taken hundreds of lives.

Extreme weather events, include heat waves, are becoming more frequent in response to rising levels of greenhouse gases increasing the earth’s average surface temperature. Periodic cooling and outlying atmospheric conditions may still occur, but in aggregate, the globe is warming at an alarming rate. This summer was no exception to the developing trend. With record heat waves on four continents and the hottest La Niña year ever documented, 2018 is incontrovertible proof of man’s pernicious impact on the planet….