A report from BankTrack shows the amount various banks have lent to fossil fuel industries over the past few years. No wonder the frackers won’t go away! Download the report here.

A recent video The Easiest Change You Can Make | In Depth recommends people switch to credit unions, which help local people rather than global polluters.

Excerpt from the BankTrack web site: 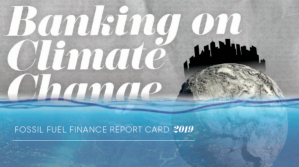 Banking on Climate Change 2019 is the tenth annual fossil fuel report card and the first ever analysis of funding from the world’s major private banks for the fossil fuel sector as a whole.

Expanded in scope, the report adds up lending and underwriting to 1,800 companies across the coal, oil and gas sectors globally over the past three years. The report also tracks fossil fuel expansion by aggregating data on which banks are financing the 100 companies most aggressively expanding fossil fuels.

JPMorgan’s volume of finance for fossil fuels 2016-2018 is a shocking 29% higher than the second placed bank, Wells Fargo. The bank stands out even more from its peers in its volume of financing for the top companies expanding fossil fuel extraction and infrastructure: since the Paris climate agreement, JPMorgan Chase’s $67 billion in finance for the expanders is fully 68% higher than that of Citi, in distant second place.

With Morgan Stanley and Goldman Sachs in 11th and 12th places respectively in the fossil fuel financing league table, all of the big six U.S. banking giants are in the top dirty dozen bankers of climate change. Together, U.S. banks account for 37% of all global fossil fuel financing. Collectively, the U.S. banks are the biggest source of funding for fossil fuel expansion since the Paris Agreement was adopted…

This site uses Akismet to reduce spam. Learn how your comment data is processed.